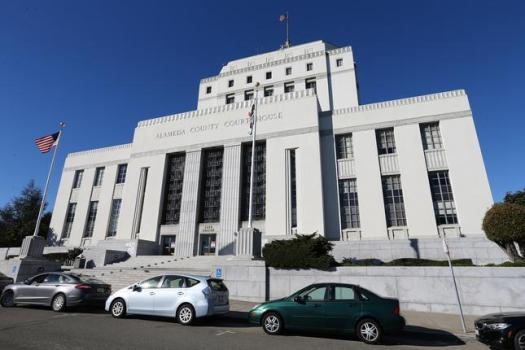 Bay Area courthouses come in different shapes and styles, from the historical to those that look as creatively designed as a strip mall. One of our favorites is the Alameda County Superior Courthouse, which was re-named the René C. Davidson Courthouse in honor of a longtime court recorder.

In our work as a business and employment law firm, we often visit this courthouse. 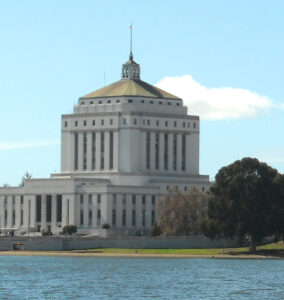 From a professional viewpoint, the courthouse houses both civil and criminal trials. From a personal standpoint, it’s a beautiful place to spend an afternoon.

While the Art Deco architecture is worth studying, the courthouse’s landscape sets it apart from other courthouses in the county. The building sits right on the edge of Lake Merritt, making a striking contrast to the very serious criminal courtrooms, where criminal felony trials are held.

The interior lobby includes two 10 x 30-foot marble murals. The murals were created by Marian Simpson of Berkley and sculptor Gaetano Duccini of San Francisco as part of the Roosevelt Administration’s New Deal Federal Art Projects (FAP) and the Works Progress Administration (WPA). According to livingnewdeal.org, the first mural “...is called “Exploration” and depicts the Native American and Hispanic history of Alameda County.  The other is called “Settling of California” and portrays the settlement of the area by frontier settlers.”

Art lovers can catch a glimpse of the murals by peeking through the windows, but the angle and glare make it difficult to see them clearly or straight-on.

The exterior of the building is beautifully landscaped. The park-like setting with waterfront views is a peaceful respite from the busy world outside and the legal proceedings taking place between the courthouse walls. 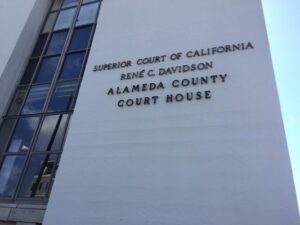 If this courthouse had a motto, it would be: The Fifth Time’s a Charm. The first incarnation of the Alameda County Superior Court was the loft of a general store in Alvarado, which is now Union City. By 1855, the loft space wasn’t big enough to handle a rapidly growing population’s civil and criminal demands. To accommodate that growth, along with the need for more space, a “real” courthouse was constructed in San Leandro. It cost the taxpayers $30,000.

Unfortunately, the Hayward Earthquake (magnitude 6.3 to 6.7) destroyed that building in 1868. Citizens rebuilt the courthouse, and it continued serving in San Leandro until it was eventually demolished in 1926.

Continuing growth and expansion created the need for a larger courthouse and a different location. Since Oakland had become the busier and more centralized hub, the community built a third courthouse, a simple two-story building. Then, a more regal Second Empire-style courthouse building was constructed in 1875. This third version, called “The Hall of Justice,” was located in Washington Square, on the west side of Broadway - between Fourth and Fifth Streets. Click Here to see a picture of how it looked. Eventually, to accommodate further expansion development, this historical building was demolished in 1950.

The fifth and, so far, the final version of the Alameda County Superior Courthouse was built in 1936. Not surprisingly, its Art Deco style is “of the era,” designed by architects Will G Corlett, Henry A Minton, James W Plachek, William E Schirmer, and Carl Werner.

This particular Bay Area courthouse has a bit of fame and notoriety. Most recently (2016), the FBI was chastised for hiding microphones outside of the courtroom without a warrant. At the time, the FBI was trying to arrest Alameda and San Mateo real estate investors for fraud from 2008 to 2010, during the economic crisis.

In 2008, the creators of Mythbusters used the courthouse to stage a “could it happen” prison escape while using only the items on hand for more inmates, such as toilet paper, human hair, and bedsheets.

Finally, and most sadly, the René C. Davidson Courthouse held the Chauncy Bailey murder trial. Chauncy Bailey was a highly-respected Bay Area journalist, murdered due to his investigations into a local crime syndicate that he was investigating for a story.

Unfortunately, for security reasons, the interior and exterior of the Alameda County Superior Courthouse are off-limits to the public. However, it is still worth driving by to see the historical building in person when you’re in the area.

For other nearby Alameda County Courthouses, see Dublin and Hayward.